The Council or Committees may from time to time establish working groups to research and develop ideas or projects. Working groups are informal but governed by a terms of reference. Working groups cannot make decisions on behalf of the Council. 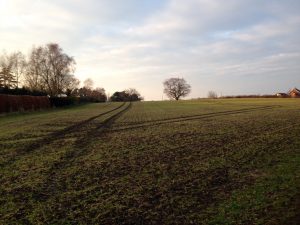 The farmland to the east of Blackfirs Lane and west of the Congleton Town Boundary was known on the old Cheshire Tithe Map as “common land” in the ancient Parish of Radnor.  The Rhead family (wealthy Mill owners) and residents of Somerford bought this prime agricultural land and Blackfirs Farm in 1952 from the Radley family.  Blackfirs Farm was later sold to Mrs Jean Crawford who is the current owner.

When Mrs Irene Lavinia Rhead died in 1997 she bequeathed the land approximately twenty acres to the charity The Royal Society for the Protection of Birds, (RSPB).  It was her express wish that the land should be preserved and used for the benefit of wildlife and should not be built upon as stated in her will.  The land currently forms a green open space separating urban Congleton from the more rural Parish of Somerford.  Since the land was handed over to the RSPB it has been let out to a local farmer, who has grown winter feed crops.

In the Cheshire East Council’s emerging Local Plan the land has been marked as suitable for development despite local opposition.  The RSPB wish to capitalize on its intrinsic value and have put forward the land for development.  However after much local and national negative publicity the RSPB approached Somerford Parish Council with a view to gifting a significant proportion (appox nine acres) of the land to the Council to form a haven for wildlife by creating a wildflower meadow and community orchard.

This generous offer adheres to Mrs Rhead’s wishes and is an excellent opportunity for Somerford Parish Council to create a fantastic communal green open space.