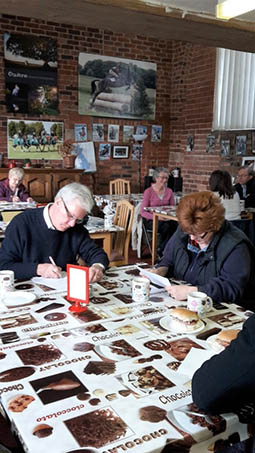 A consultation event consisting of a breakfast meeting was held from 8am so that local business people could attend and complete a questionnaire regarding the size, scale and nature of business within Somerford.

Thirteen businesses attended and enjoyed tea, coffee and bacon rolls whilst they filled out their questionnaire. The results of the questionnaire can be seen in the summary contained in the documents section of the website.

This was a meet and greet event held at Blackfirs School on Longdown Road. This was the first time that the steering group got the opportunity to meet the local residents and listen to their concerns.

Previously a preliminary questionnaire had been issued to every household in the area asking open questions of what residents liked, didn’t like and would like to keep amongst other questions.

Somerford Neighbourhood Plan Steering Group held their second event at Davenport Chapel. It was an Afternoon Tea event where visitors could examine the draft visions and objectives proposed.

A survey had been delivered to all residents in May and an overwhelming 50% plus returned their surveys. A random draw was made of all that were received and two prizes were awarded. The results of the survey were used to formulate the draft visions and objectives. These were presented at the event for residents to discuss and comment on.

At this event the steering group was very pleased to have Fiona Bruce the local MP drop in.