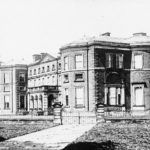 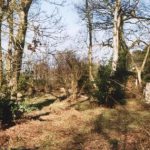 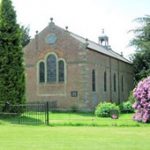 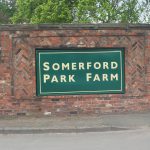 Somerford was a township in Astbury ancient parish, which became a civil parish in 1866. Within the geographical boundary that we know as Somerford today is in fact an amalgam of two ancient parishes that of Somerford and the other of Radnor. A boundary change in 1895 joined Radnor with Somerford. As to the origins of the parish’s name it is easy to surmise as being a convenient place to cross the River Dane. Although not that easy as it can only be used at low water in the summer.

Field names and archaeology of surrounding areas show that Bronze Age, Romans, Saxons and Scandinavians passed through the area.

Somerford became associated with the Shakerley family, who over previous centuries had holdings in Cheshire acquired by good trade and even better marriages. It was Peter Shakerley (1650-1726) MP and Governor of Chester who first set out Somerford Park, building the hall and the chapel. The parkland is characterised by the dressed stone wall which still survives today.

Following WW1 the family’s influence went into rapid decline due to the crippling death duties. The large home was demolished in 1928. During the 20th century the estate was broken up piecemeal and bought by local farming families and wealthy mill owners.

The estate is now Somerford Park Farm a large part of which is an equestrian centre.